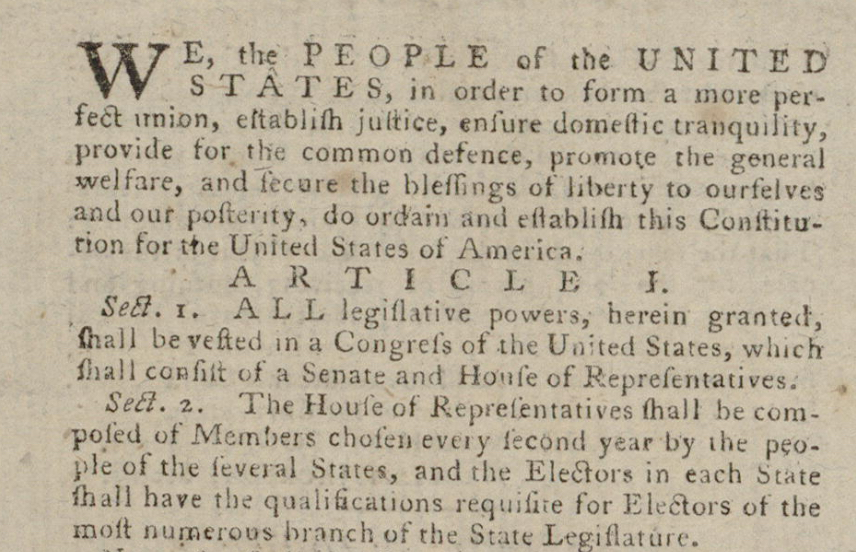 “We the People of the United States, in Order to form a more perfect Union, establish Justice, insure domestic Tranquility, provide for the common defense, promote the general Welfare, and secure the Blessings of Liberty to ourselves and our Posterity, do ordain and establish this Constitution for the United States of America.”

With these words, We began our lasting experiment with Democracy 233 years ago.  On Thursday, Sept. 17th, Americans celebrate Constitution Day and Citizenship Day.  A federal day of observance to commemorate the signing of the United States Constitution on September 17, 1787.

In declaring the first Citizenship Day in 1952, President Truman wrote in his Proclamation 2984 “Whereas it is most fitting that every citizen of the United States, whether native-born or foreign-born, should on September 17 of each year give special thought and consideration to his rights and responsibilities under our Constitution.”  President Obama would later write in his Proclamation 8418 “To succeed, the democracy established in our Constitution requires the active participation of its citizenry.  Each of us has a responsibility to learn about our Constitution and teach younger generations about its contents and history.”

Congress would change the designation of Citizenship Day to Constitution Day and Citizenship Day in 2004.  Continuing in this spirit, and in service to the day’s educational mission, a whole host of public and private organizations have put together resources and activities to inform and enrich us as Americans.  One of my favorites is the National Constitution Center in historic Philadelphia.  The Center and Museum is located just blocks from Independence Hall where the U.S. Constitution was debated and signed.

This year the National Constitutional Center will honor Associate Justice Ruth Bader Ginsburg by awarding her the Center’s 2020 Liberty Medal, for her efforts to advance liberty and equality for all, in a special video tribute on the 17th.  The program will feature internationally renowned opera singers.  Here is a nice article with Ruth Bader Ginsburg talking about her long and enduring love of the opera!

New this year, the Center has put together Women and the Constitution to celebrate the 100th Anniversary of the 19th Amendment, which gave women the right to vote, the most important right of citizenship.  There are video programs and podcasts, links to the Interactive Constitution, and an interactive map called “The Awakening” which explores how women’s suffrage at the State level paved the way for the 19th Amendment, as well as, “The Debates” where you can listen to the range of arguments both pro and con, and much more.

Both the National Archives and Library of Congress have wonderful online offerings, too.  Original copies of the Constitution, Bill of Rights, and Declaration of Independence proudly known of the Charters of Freedom can be viewed at “America’s Founding Documents.”  You can meet the “Framers of the Constitution” and take a closer look at the ratification process in “A More Perfect Union.”  The curved walls of the Rotunda for the Charters of Freedom are graced by the Faulkner Murals painted between 1933 and 1936.  Each of these beautiful murals are about the size of a city bus (14 feet by 37.5 feet) and is just one of many exhibits at the National Archives Museum in Washington, D.C.

A most interesting resource curated by the Library of Congress is the Constitution of the United States: Primary Documents in American History.  This Digital Collection includes records of the Constitutional Convention known as Farrand’s Records, as well as, the papers of Alexander Hamilton, George Washington, James Madison, and Thomas Jefferson.  If you start to click around, you will find more gems like Madison’s Treasures.  This is the largest collection of original Madison documents in existence.  Many of the documents are related to his role in drafting and ratifying the Constitution, and the introduction of the amendments that would become the Bill of Rights to the First Federal Congress in 1789.

Scholars here at UW-Madison have also made enormous contributions to the study and understanding of the U.S. Constitution.  The University is home to the nationally renowned Center for the Study of the American Constitution (CSAC).  The Center’s masterwork The Documentary History of the Ratification of the Constitution is free and accessible to the public through the UW Digitized Collections.  Like the other websites mentioned above, the more you explore the more you will discover.  CSAC’s website includes links to videos on the American Founding Period, maps of the original thirteen States and how they voted to ratify the Constitution, lesson plans to use in the classroom to facilitate the study of The Documentary History of the Ratification of the Constitution, and the Center’s online Bookstore.