On the latest episode of the WI Law in Action podcast from the UW Law Library, we talk with Professor Emeritus Stewart Macaulay, an internationally recognized leader of the law in action approach to the study of contracts – and an amazing storyteller.

Macaulay’s legacy was recently highlighted in the new book, “Stewart Macaulay: Selected Works,” which contains some of his best-known research from the last 60 years, as well as some of his more obscure publications.

Professor Macaulay on inspirations for the law in action approach to the study of contracts. 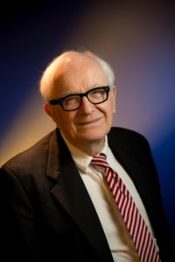 I used the contracts casebook that was being used by the professors here at Wisconsin. That was Lon N. Fuller’s casebook on contract, which was a very radical book for its time. The whole idea was he put damages first. It started talking about remedies. Again, a legal realist, he would say, “Who gives a damn?” The subheading of that first chapter is, “Don’t spend your time pondering offer and acceptance, unless you know what difference it makes.”

Macaulay also describes an illuminating conversation with his father in law, retired former general manager of SC Johnson & Son’s, about what he was teaching in his contracts course:

Professor Macaulay on the law in action approach to contracts at Wisconsin:

Let’s look at contract law as delivered. You have to go get it. It doesn’t have little legs and crawl down off the statute books for you. Going and getting it means you have to pay somebody some money. That’s one of the things I’m very proud of in our contracts casebook. It’s been there in the various editions. First case, the last paragraph in it denies lawyers fees because that’s not part of the damages. That’s edited out when that case is used by many, many other casebooks. We have that front and center.

Notice, your handicapping a horse race. Yes, it’s going to cost me this amount of money to get what amount of damages, if I win. It’s deciding to go ahead. Just bringing a contracts lawsuit is a tough decision. That’s one of the propositions that’s simple. Law isn’t free.

Professor Macaulay on responding to criticism  – and dead rattlesnakes:

The person who really lit into me was Grant Gilmore, who is a famous law professor University of Chicago, Yale Law School, and so on. He called me the Lord High Executioner of the Contract is Dead Movement. Well, it’s cute. You laughed…

To read more of Professor Macaulay’s scholarship, visit his profile on SSRN or the UW Law Repository.  And see our earlier WisBlawg post on the new book, “Stewart Macaulay: Selected Works.”  Interested in hearing more from Professor Macaulay on his academic career, research methods, publications, and pedagogy?  Check out his 2016 oral history available on our UW Law Repository.