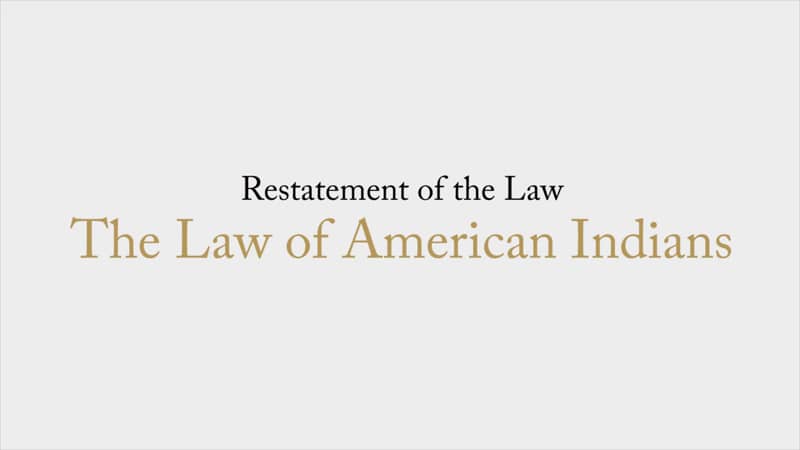 The Restatement of the Law of American Indians (“the Restatement”) is the product of the largest collection of experts in federal Indian law ever assembled, working collaboratively over 10 years. The Restatement experts came from a diversity of experiences, from both public and private law backgrounds, as well as from tribal, state, and federal backgrounds. Lawyers who tended to represent tribal interests engaged with those that tended to represent federal, state, and private interests in opposition to tribes.

The symposium will feature the nation’s top experts, judges, practitioners, and tribal leaders in the Indian law practice to discuss the topics analyzed, clarified, and critiqued, in the Restatement, the development of the Restatement project, and the future of Indian law practice.  It will be held in-person at the University of Wisconsin Law School, although remote viewing is available. The Symposium is free and open to the public and registration is required to attend in person or virtually.

The Symposium is headlined by Keynote Speaker, Professor Stacy Leeds of Arizona State University Law School, and will feature five panels structured around the chapters of the Restatement:

As a precursor to the symposium, the Wisconsin Law Review podcast, Forward, features a discussion with a panel of legal scholars who helped draft the Restatement. Professor Matthew Fletcher, Professor Wenona Singel, and Attorney Kaighn Smith discuss the drafting process, the goals of the Restatement, and the importance of understanding basic tenants of Indian Law.  I thought that this podcast, hosted by Wisconsin Law Review associate, Treger Metge, was excellent – well-produced, insightful, and thought-provoking.